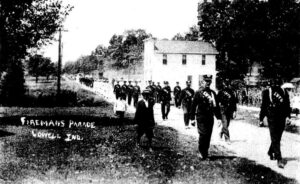 The Lowell Volunteer Fire Department was organized in 1897 by a group of citizens to protect their own property and businesses as well as others. The first meeting was held October 5, 1897 with the first appointed Chief being M.E. Nafus. On November 2, 1897, Charles Sherard was the first elected Chief. He served in that position until June 7, 1898. Listed under separate heading are the men who have served as elected Chief to this department. In the past 122 years, there have been only 22 Chiefs.

At the time of organization, the equipment consisted of hand-pulled carts with buckets and a horse drawn wagon. It wasn’t until 1916 when the town purchased its first fire engine, which was a 1916 Reo Chemical Truck. The storage of fire equipment started in the still existing downtown area in private businesses or garages. Men were summoned by the sound of a big bell ringing. It is popular opinion that the bell on display at the existing fire station on Commercial Ave to be that same bell. As years passed and fire engines were purchased, they kept them at the Old Police Station, Town Hall and what is also known today as the Olde Towne Square.

Over the years, many expansions were made to better serve the people. Many different pieces of equipment were added including water trucks, grass trucks and emergency units. The first water truck was purchased by the volunteers in 1936. At that time, as it is today, many departments buy second hand trucks and build their own.

In 1950, Cedar Creek Township built a new station at Fremont and Jefferson Streets. The Township still owns the building and is now housing the Cedar Creek Trustee and a Community Building. 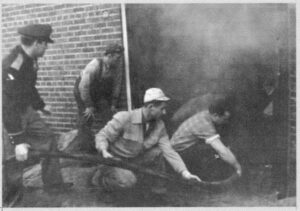 After many years of growth and still in the 80s, we were keeping fire units outside and at different locations. Through a lot of effort, planning and fighting, the Town of Lowell built out now existing Fire Station located at 1331 Commercial Ave in Lowell. The entire station was built and paid for totally by the town, and also the volunteers completed a good portion of the building. The Lowell Volunteer Fire Department moved into the building on June 3rd, 1983 where it remains to operate to the present day.

The membership of the volunteer department has varied since organizing in 1897. From records we have, the roster in the early days and up until the late 1940’s, was approximately 20-30 members. From the 1940’s to the later 1960’s and early 1970’s there were just 12 to 16 members at all times. It did grow from there and we have had many years of dedicated service to the department and community. As of 1997, there have been 64 retired members with 10 years or more of service. Back to 1897, the men have been recognized by placing their name on a large plaque displayed at the station with the years of service.

The Lowell Volunteer Fire Department, Inc is still growing and progressing each year to provide the people of our community the best in protection. 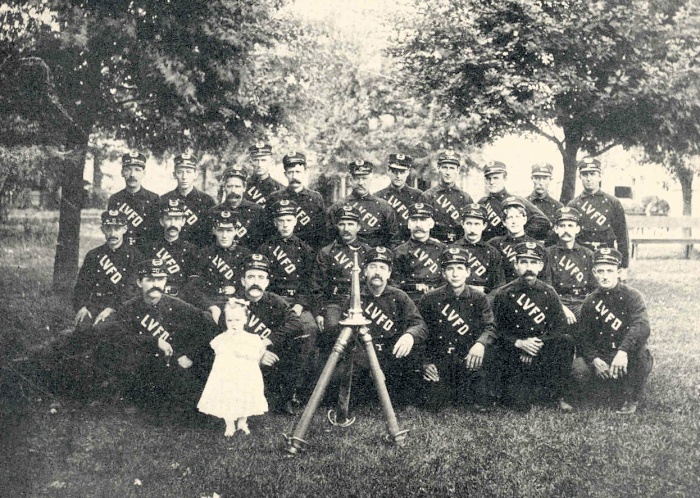 From the “Souvenir Album of Lake County” 1906
It dates from 1896, starting with 20 members and growing to 30. It gives prompt, efficient, cheerful services, and is worthy of honor and regard. Its service being but nominally remunerated, it belongs to the heroic and benevolent department, protecting lives and property day and night, of rich and poor alike.

Lowell's efficient department of volunteer firemen is a long step in progress (and protection) looking back to the bucket brigade years.

Prior to 1916, fireos extinguished flames with the aid of a hose cart and 500 feet of hose.

Prominent Lowell men met in November of 1896 and organized into a cooperative group to protect their homes and business houses in the event of fire.

The town and township purchased its first truck in 1916. In 1928 Cedar Creek bought a truck and remodeled the fire station, maintained in the town hall, corner of Commercial and South Fremont Street.

This truck served until 1940 when Lowell got the modern Peter Pirch truck still in use. In 1949 the township bought another Dodge fire truck built by the American Fire Apparatus Co., also an auxiliary pump and light plant. The department has a water wagon, purchased in 1947.

In 1950 a Chevrolet panel first aid truck equipped with oxygen tent and inhalator was obtained. The fireos have all studied first aid courses taught by American Red Cross.

In the past 56 year Len Ragon, Byrl Grant and John Eskridge have served as secretaries. During World War II, Milton Spry filled the post. Chief Harold Brownell has been on the force 30 years and has been chief for the past 13 years.

All who are serving, and all who have served, are public spirited citizens, deserving of highest praise.

The following Nov. 28, 1984, Lowell Tribune article can be found in the Local History Files at the Lowell Public Library (LH--Vital Statistics, vol. 1, page 45):

Harold W. "Bus" Brownell, who served for 30 years as Lowell fire chief, died last week at the age of 84.

One of the founders of the Indiana Volunteer Firefighters Assn. (IVFA), Brownell was a life member of the organization and carried membership card No. 1 since its incorporation in 1946. The number was retired in his name when he retired from the Lowell Volunteer Fire Dept. Dec. 31, 1968.

"We thank and praise Bus and the other men he worked with for starting one of the finest organizations in the state today," said former Lowell Fire Chief Jack Eskridge, who conducted a IVFA service at Sheets-Love Funeral Home in Lowell Tuesday evening, Nov. 27. Eskridge said Brownell and others, including Alvin Guske of Crown Point, Roy Kittredge of Hobart, Cornelius Vandervart of Munster and Sam Ordean of Black Oak "had a dream to start an association," and did so in 1945.

He was elected Lowell's assistant fire chief in 1938 and a year later, on Dec. 11, 1939, he was elected fire chief, a position he held until his retirement from the department. He was succeeded by Burl "Pete" Carlson.